Johnathan Thurston is considered by many to be one of the greatest Rugby League players of all time, and Redvee was fortunate enough to meet the former Australian international, Queensland State of Origin and Indigenous All Stars representative during his recent tour of the UK, during which he appeared in front of a sell-out crowd at the Totally Wicked Stadium. 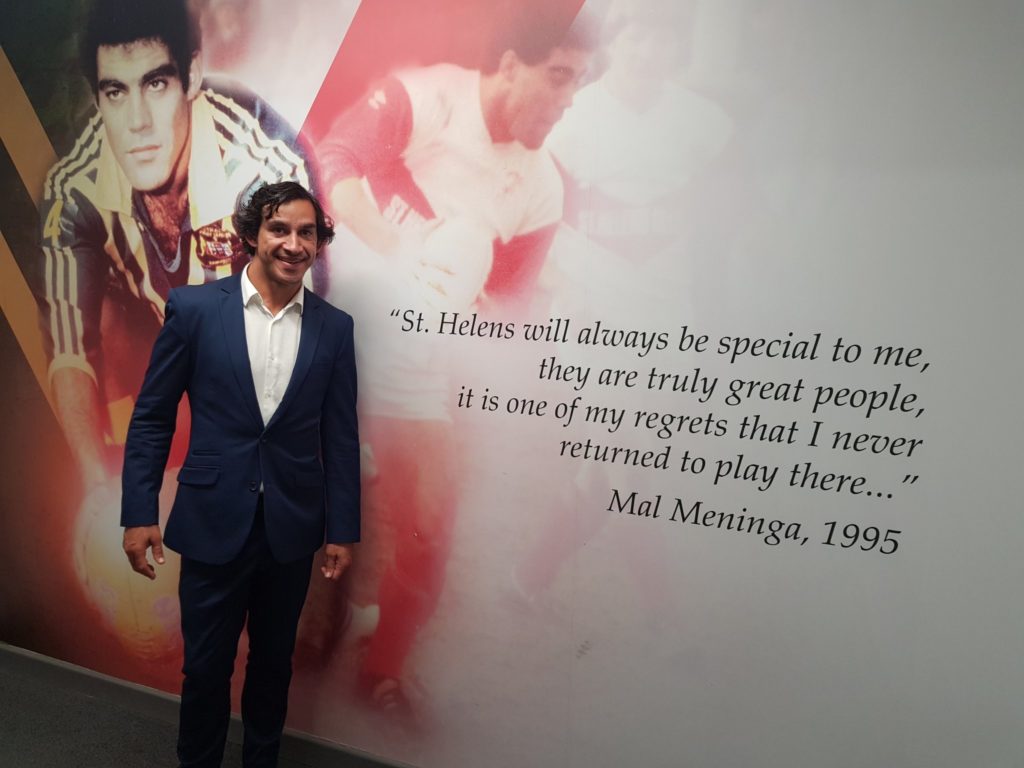 Even legends have heroes – and for JT, his is one that will be mutually shared by many Saints fans – Mal Meninga. Thurston is able to call Mal a friend, and upon hearing of the wall within the stadium dedicated to the Saints Icon, JT insisted that the evening’s host Pete Emmett take him to see it, before requesting a photo that he could sent back home to his mentor.

“Yes, he had a massive influence on my career Mal Meninga – he was a hero of mine growing up as a kid supporting the Canberra Raiders in the late 80’s and early 90’s, and then obviously through being coached by him at Origin and at Country level he’s had a massive influence on me so he’s someone that I’ll always continue to talk to and I speak to him when I need advice.”

Thurston will forever be remembered for the starring role he played in the North Queensland Cowboys inaugural Grand Final win in 2015, where his legend status was secured after he led the Cowboys to an extra time 17-16 victory, kicking the winning field goal – but it didn’t come without drama, as he had earlier seen a kick from the sideline to win the game on the hooter agonisingly hit the upright.

“You remember those moments because they’re such significant moments in your life, playing in a Grand Final and obviously you know the goal kick from the sideline to win the Cowboys their first ever Premiership is something that I lived for. I don’t want to be anywhere else in the world than right there in that moment so when I missed it, it certainly crushed my dreams but I had to snap out of it and prepare for the next job.”

“I was lucky to get a field goal, well not lucky as such, just lucky Ben Hunt dropped the ball for it for our sake and we capitalised on that so to be a part of the Cowboys first ever Premiership team is something that I’m extremely proud of.”

The Cowboys went on to win the 2016 World Club Challenge, defeating the Leeds Rhinos, and following our own valiant efforts as a club against the Sydney Roosters, we wanted insight into just how the game is thought of amongst players in the NRL, from a man with insight into winning both.

“It’s still huge, when you win the Grand Final you certainly want to win the World Club Challenge, because you want to be known as the best club in the world at that time.”

“Whenever you get that opportunity you want to take it with both hands, so after winning that Grand Final you put your hand up and want to play in that World Club Challenge as they’re so hard to win”

Thurston was the only player to play in all 24 games of Queensland’s eight-year State of Origin winning streak from 2006, having played 36 consecutive Origin matches from his debut in 2005, and during the 2015 State of Origin series he broke the record for most points in State of Origin history, finishing his 37-game Origin career with 212 points.

JT also holds the record for most points for Australia, achieved during a 38 game spell, the highlight of which was the 2013 World Cup Final win over New Zealand, where he was named Man of the Match – his fourth of the tournament.

Although Origin has always been seen to be the pinnacle for many, he believes the appointment of Mal Meninga as the Kangaroos Head Coach may challenge that perception moving forward,

“They’re both tough, I think the speed of Origin is probably a bit quicker than Test Football, but it’s great that Mal’s taken over the Kangaroos job because he’s really elevated that Jersey now to be the pinnacle of Australian sport or certainly Australian Rugby League.”

“When I was coming through Origin was the pinnacle, so its good to see that now and I think if you would ask a lot of the players being coached by Mal, he’s really put that Kangaroos jersey up there as the pinnacle of Australian Rugby League.”

The role of the halves is one that Saints fans have found themselves discussing at length recently, so we were intrigued to find out from one of the best to ever play the game whether there was much difference between playing Stand Off and Scrum half in the modern game.

“There’s not too much difference, obviously one’s on the ball and the other one gets to roam a bit, but a lot of teams now play left side/right side with their halves, whilst other teams play on the ball with their half and use their six to be on the long side so there’s a little bit of a difference in there.”

Thurston brought to a close a glittering 16-year first grade career at the end of the 2018 season, a career in which he became the only ever four-time Dally M medallist winner (for the NRL season’s best player) and the only ever three-time winner of the Golden Boot Award for the world’s best player.

After winning so many accolades, it would have been easy for many stars to fade into the background, but for Thurston, it seems to only have been the conclusion to a memorable first chapter. He has remained busy, and aside from conducting many successful public speaking engagements, he has continued to use his influence in order to promote many interests close to his heart.

“I’m pretty busy, I’m on Channel Nine (Australian TV) where I do every Thursday night game and then I’ve got eight Friday night games so I’m away from home a little bit.”

“I’ve got an academy (The JT Academy) which is an employment and education zone, so we supply jobs to people around the country, and then I co-own an Airline that serves as far as North Queensland – we do around 40000 passengers a year, and then I’ve got four kids so i’m extremely busy!!”

We’d like to thank MJKSportsEvents for helping to arrange this interview: Follow @MJKSportsevents on Twitter to ensure that you don’t miss out on the opportunity to attend next time with another legend of the game!