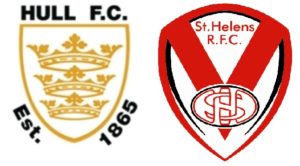 As we enter the final round of the season, Saints have the luxury of a no pressure game and a week off to follow thanks to their impressive season finishing top of the league. Whilst our league position will not alter regardless there is a chance to set a few records this Friday by winning the game. The two key records are the biggest gap between 1st and 2nd place which currently stands at 15 points, and we can set a Super League record of most points gained a season, which is currently 50 points.

Saints currently sit 16 points clear and have 50 points to their name, so one record is already equalled. It would be fitting for Saints to go to Hull and get that record. We’ve lost just three games all season, two of those when fielding weakened sides at London and one in the South of France. We have so far won every game played in the North of England, which is a quite incredible achievement.

The win against Huddersfield last week was very comfortable, and we scored some excellent tries, but we made quite a few errors that a better side would’ve punished. We need to improve before the Play Offs, but it was certainly a good step in the right direction. Coote, especially put in a good performance, dispatching all his goal kicks and looked solid from the back.

Despite all that, a lot of Saints fans (myself included) will head into the Play Offs nervous about our chances of getting to and winning at Old Trafford. Our big game record is grim, having lost all our Semi Finals and one final since our last major trophy win in 2014. Saints have the quality and have dominated every side this season, so there should be strong belief that we can go all the way, but the players need to believe in themselves, not panic when under pressure and perform to their best to win the major prize in October.

Hull FC are the ultimate Jekyll and Hyde team and their current 6th place in the league probably reflects where they are as a team. They reached the Semi Final of the Challenge Cup and have had some good wins in the league this season, but their inconsistency has frustrated many amongst the Hull faithful.

You just never know what you’re going to get with them, and recent results have been extremely poor to say the least. They were in the battle for 2nd spot a few weeks back but a series of defeats have moved to them out of the Play Offs and results are now out of their hands. They probably couldn’t have asked for tougher opponent in their final game, although at home they can be a tough team to play against.

From a Saints point of view, I will be hoping the good Hull FC turns up on Friday, as I feel a tough battle is exactly what Saints need ahead of the Play Offs and before a week off. We need to be tested and we need a team that is desperate for the points, which Hull FC are, as they battle for that final spot in the Play Offs.

Paolo returns for Saints as Danny Richardson drops out of the 19. Mark Percival is a doubt with a head injury but is in the 19-man squad. Matty Costello is on standby should he fail to make it. Apart from long term absentee Matty Lees, the rest of the squad is fully fit.

Saints recent record against Hull FC is excellent and we have amassed 102 points in two games against Hull this season. Our last four meetings have been one sided games, and that is a big concern for Lee Radford’s side. Saints used to struggle at the KC Stadium, but our recent form there is very strong, and this game will hold no fear for Saints.

Lomax v Kelly – Two of the best Stand Offs in the competition face off this Friday. I watched Hull’s game with Cas last week and Kelly was probably the only player for Hull that came out of that game with any credit. He tried his very best to make Hull competitive, but the rest just weren’t at the races. His running game is strong, and he will be Hull’s biggest danger for us on Friday.

Roby v Houghton – Both have similar styles and are well liked amongst their supporters. Houghton never stops working and makes an unbelievable amount of tackles every game. He’s not been as good this season as previous seasons, but he is still one of Hull’s more consistent performers and the battle of the hookers will be a good one this weekend.

Saints need to continue their good league form and go into the Play Offs in confident mood. We battled to a good win against Cas two weeks ago and strutted to a confident win against Huddersfield. I’m not sure what we’ll see from Hull this Friday, but if Saints compete hard and reduce the errors, Hull won’t be able to live with us. Saints by 16.